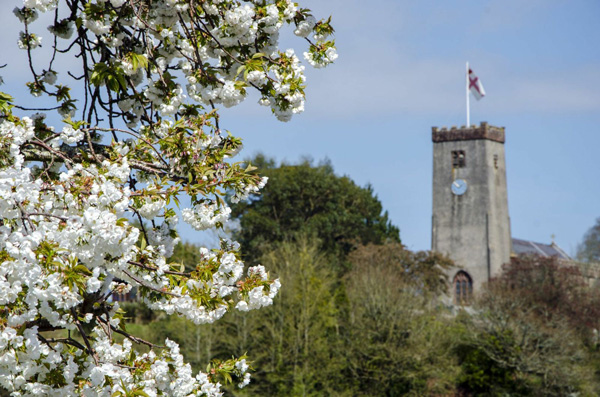 Situated on a quiet creek off the beautiful River Dart, an area of Outstanding Natural Beauty, within the South Hams area of South Devon, Stoke Gabriel is a pretty thriving village with an interesting history, some ‘old wife’s tales’ and traditions which are still enjoyed today

Here are a few of the things we know about our village :-

Tradition has it that :-

“Walk ye backwards round me

7 times round for all to see

Stumble not and then for certain

One true wish will come to thee”

Something else interesting about the church – the sexton/verger has been handed down in the same family for 13 generations – over 400 years ! – Norman (Betts) the current verger is the last in the line as there is no family to follow him.

It’s a nice friendly inn, full of character, and serves nice ‘pub grub’ and in the winter you are greeted by a roaring log fire – it very much the hub of the village.

What else does our village of Stoke Gabriel offer?

Aish is only a mile out of Stoke Gabriel, and it is a lovely walk down, Hoyle Lane,  the narrow road opposite Aish Cross House – passed the very pretty cricket ground on the right and Hoyle’s wood on the left ( worth a detour here to see if you can find any of the ‘fairies’ left by the children)  The wood was gifted to the village for recreation some years ago. There is very little traffic using Hoyle Lane and the walk takes 20 minutes to the edge of the village or 35 minutes to the Mill Pond